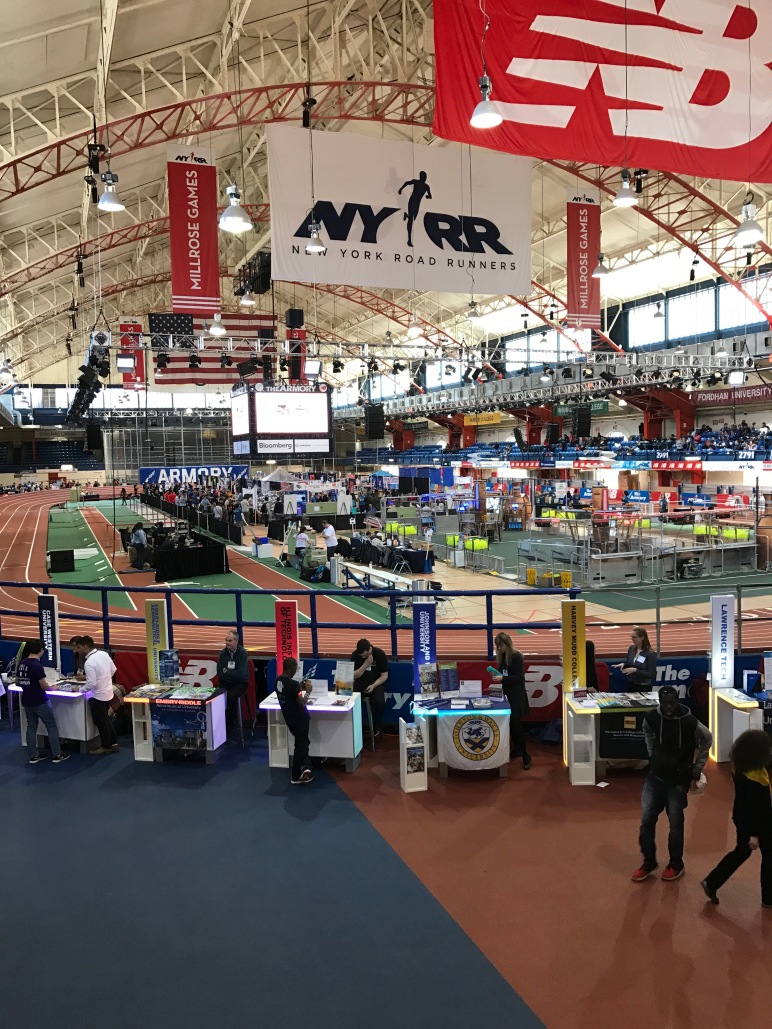 Team 5298 competed at the NYC Armory Track and Field Center this past weekend, bringing Sparky to its first competitive event of the season. After many, many late nights, we were thrilled for the opportunity to attend our first competition of the season.  Fifteen students and three coaches/mentors spent the day on Friday rebuilding parts of the chassis, testing code, and getting in some practice time.  Later in the day, some feedback from the safety inspection brought us back to the pit for some last-minute brainstorming, creative thinking, and teamwork.  With the support of some of our new friends and nearby teams, we made the necessary modifications to qualify for the next day’s matches.

One of our mentors, who shall remain nameless, could not sleep until the match times were posted on The Blue Alliance.  The next day, we met up bright and early for some last-minute decal placement, safety inspections, tweaks, and a healthy dose of team spirit.  We had almost 50 team members, parents, teachers, staff members, and other fans on Saturday!  By the end of the day, we had made several more modifications to Sparky, ultimately removing our shooter mechanism in favor of a more accurate “gear catcher” and a lighter overall design for taking flight.

In the later matches of Day 1, Sparky took flight.  One of our favorite quotes of the day took place immediately following, when team members were jumping on top of each other and yelling with glee.  One team member exclaimed, “We won!  I mean, we lost the match, but we WON!  We won because the lift worked!”

Day 2 brought more excitement and more challenges.  We ran out of the VEX gears that we were using with the lift mechanism, necessitating a visit to the Con Edison machine shop and a slightly modified design.  There was so much excitement about the lift’s performance that some of our seniors actually had a dance-off to claim ownership of one of the stripped gears!  The team played hard to the end, scoring more gear and lift points, and rising slowly in rankings.  When all was said and done, we were incredibly proud of our team’s growth and left hopeful for next year’s challenge…

In next blog posts, we will share more perspectives on the event, reflections from this season, and our ideas for next steps in our team’s development.